Kasa Joya nestles at the well-secured and gated community of La Joya de Sta. Rosa, less than 50 meters away from the Manila South Road (Maharlika Highway), and a mere 3km from SLEX Sta. Rosa Exit. However, from Mamplasan-Greenfield Exit, the distance is 5km.

The solemn Laguna de Bay is less than 2km away east of Kasa Joya. Furthermore, the nearest industrial parks to your new home are the Monde Nissin factory and the Meridian Industrial Complex. The Enchanted Kingdom (EK), the Philippines’ premier theme park, is just 2km away from the Kasa, while the Dominican College of Sta. Rosa sits opposite the EK. The immediate neighborhood of Kasa Joya is lush green with various species of trees. The adjoining areas are residential and mostly 4-lane roads that link to major thoroughfares of Sta. Rosa.

Sta. Rosa City is the second-largest LGU (local government unit) in Laguna, next to Calamba City. The city has an average elevation of 70 meters, the highest of which is more than 390 meters above sea level. Although the city is near Laguna De Bay, it seldom experiences flooding, especially in Brgy. Dila: where the Kasa Joya is situated. 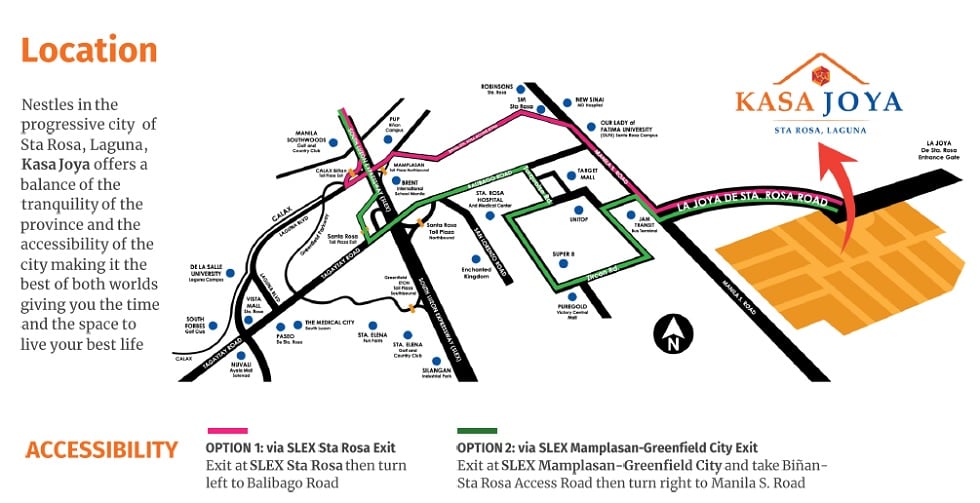